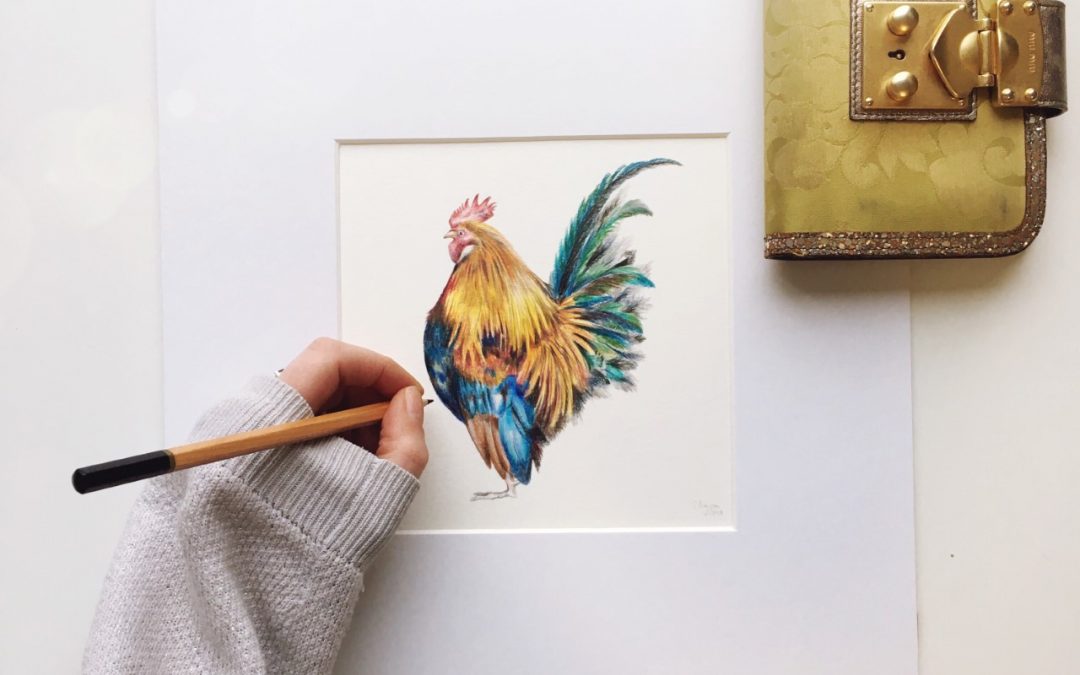 I got in a January slump. I got so bogged down in goal-setting and resolution-making, that I forgot to draw anything for three weeks. And then I started thinking that I hadn’t drawn anything and I hadn’t sold much of what I already had in stock. Slightly obsessively stalking an illustrator I admire on Instagram was torturous, as she complained of the too-many-orders she was taking whilst featuring outgoing piles of addressed parcels. And then I started doubting this whole business venture.

A burst of sunshine and the promise of a new week helped me turn things around. I unfollowed the illustrator, as our unrequited relationship had turned toxic. I decided yesterday to give myself a break, and now for two weeks just draw some fun things that have been in my mind. A rooster, since admiring one on a recent weekend trip to a nearby nature trail; a pair of variegated fairywrens, because I loves their species name and that they are socially monogamous; finish a prickly pair drawing I had started before an late-Autumn flourish of wedding bouquet orders… 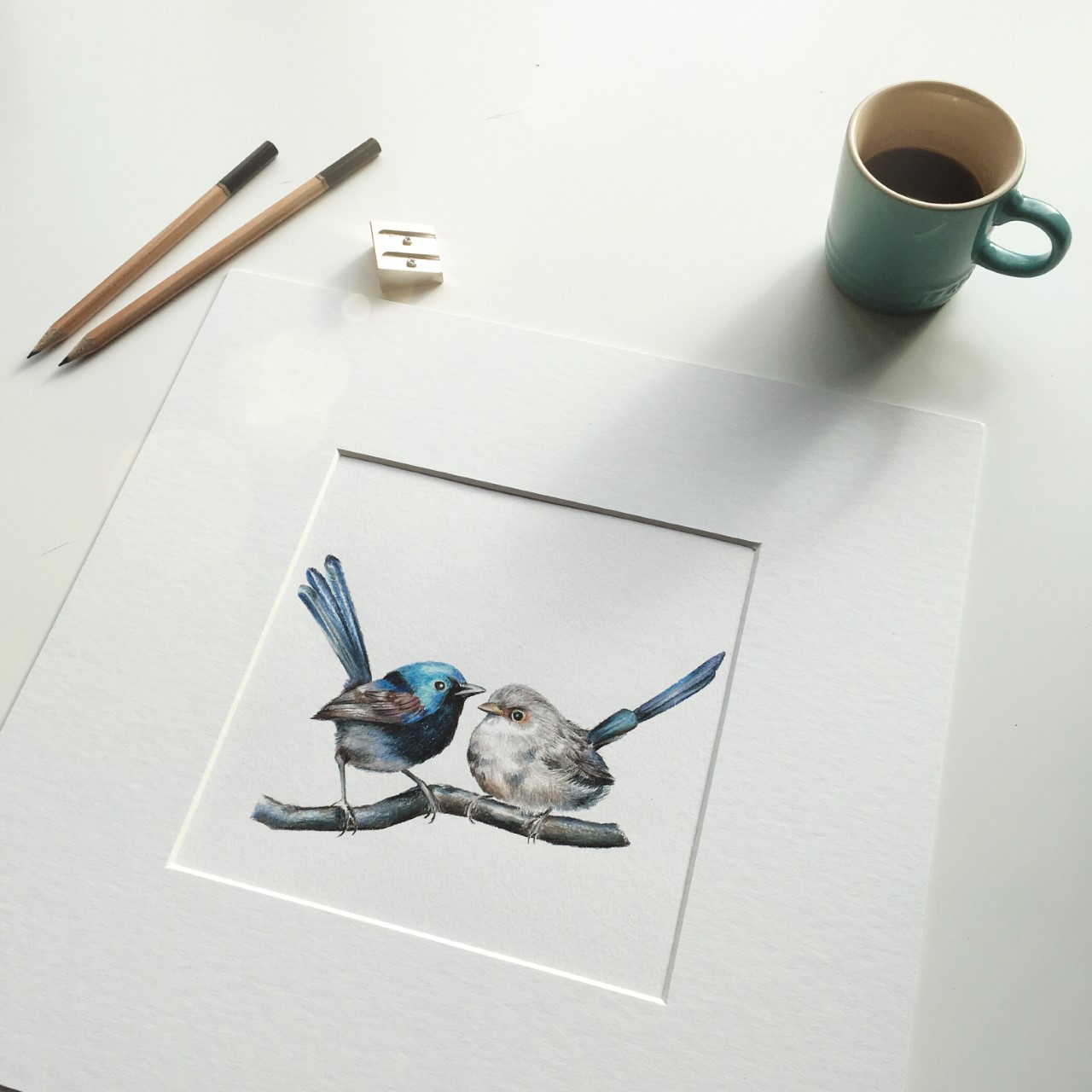 And yesterday I also did something for the first time. Normally, I draw in silence. Silence, when it can be found, is so revitalizing in our home. Sometimes the noise created by my four and two-year old daughters – the repetitive singing of mispronounced lyrics, the buzzing and banging toys, the cartoon theme tunes – all reverberate in my head and suffocate me. So silence is precious and fruitful. But yesterday I listened to a Podcast whilst drawing. Firstly, an interview with copyright lawyer, who helps demystify the law surrounding licensing and intellectual property for creatives entrepreneurs. And secondly, I listened to a slightly bullish millionaire saleswomen/author talk about bankruptcy and her subsequent bounce-back. I didn’t think I was going to like her much. But she made one point that has stuck in my head for the last 24 hours: Stop thinking about making money. Instead, think about what you create the best. What is your niche? How can you offer value? 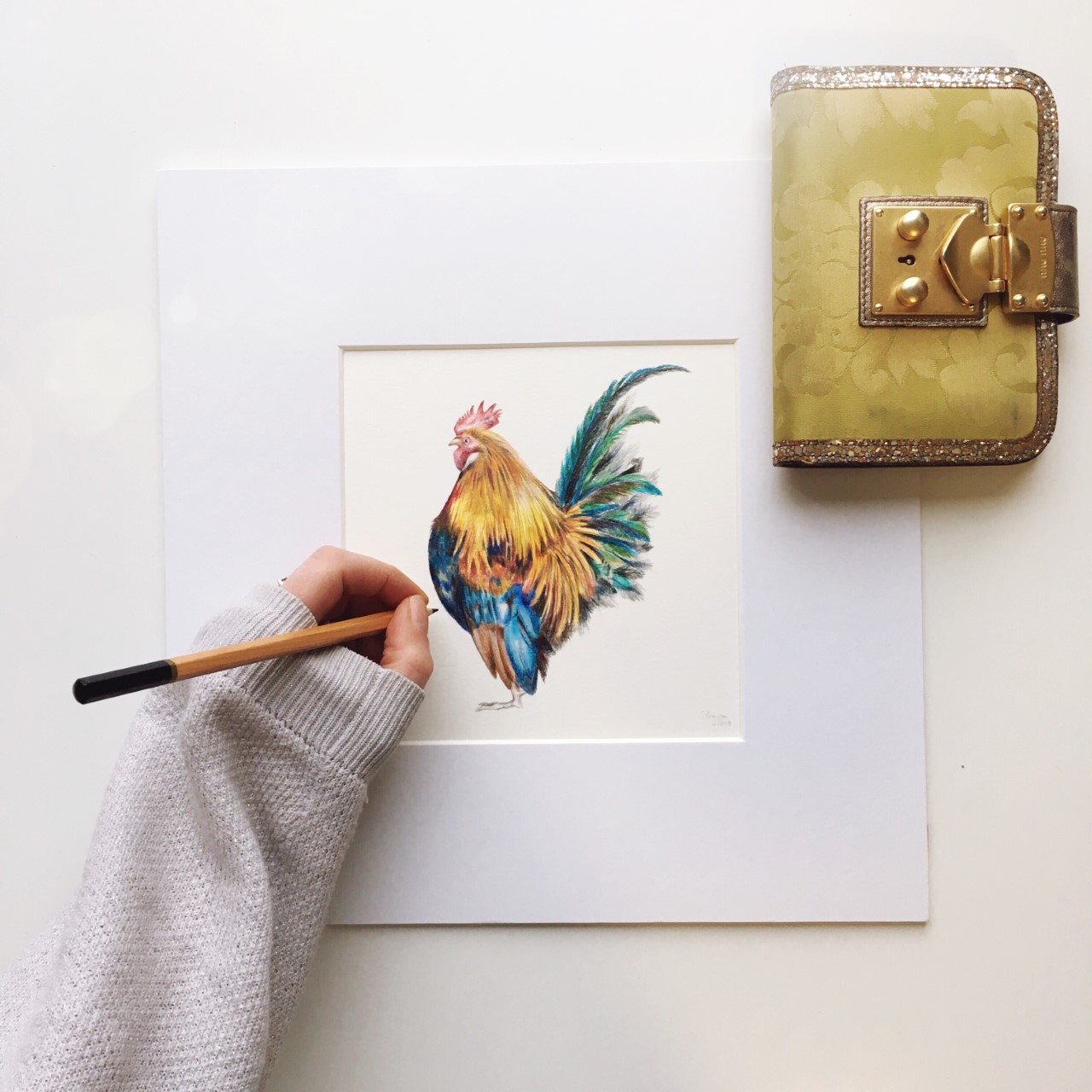 Consequently, I’m currently offering an eclectic series of one-off original illustrations for £95 each, including a mount, recorded delivery and a Certificate of Authenticity. Usually my commissions drawing start from £295, but as these don’t have the man hours of communication to-and-from a customer, and in fact aren’t as detailed (read, time-consuming), I can reduce the price. It’s an experiment, but hopefully one that will introduce me to new customers and reignite some creative freedom at the same time.

Have you ever been stuck in a creative rut? How did you get out of it?

This beaut was packed and wrapped today, ready to

A littl'un from earlier this summer 💋 Inspired

Our garden was a concrete slab patio when we moved

We use cookies on our website to give you the most relevant experience by remembering your preferences and repeat visits. By clicking “Accept All”, you consent to the use of ALL the cookies. However, you may visit "Cookie Settings" to provide a controlled consent.
Cookie SettingsAccept All
Manage consent

This website uses cookies to improve your experience while you navigate through the website. Out of these, the cookies that are categorized as necessary are stored on your browser as they are essential for the working of basic functionalities of the website. We also use third-party cookies that help us analyze and understand how you use this website. These cookies will be stored in your browser only with your consent. You also have the option to opt-out of these cookies. But opting out of some of these cookies may affect your browsing experience.
Necessary Always Enabled
Necessary cookies are absolutely essential for the website to function properly. These cookies ensure basic functionalities and security features of the website, anonymously.
Functional
Functional cookies help to perform certain functionalities like sharing the content of the website on social media platforms, collect feedbacks, and other third-party features.
Performance
Performance cookies are used to understand and analyze the key performance indexes of the website which helps in delivering a better user experience for the visitors.
Analytics
Analytical cookies are used to understand how visitors interact with the website. These cookies help provide information on metrics the number of visitors, bounce rate, traffic source, etc.
Advertisement
Advertisement cookies are used to provide visitors with relevant ads and marketing campaigns. These cookies track visitors across websites and collect information to provide customized ads.
Others
Other uncategorized cookies are those that are being analyzed and have not been classified into a category as yet.
SAVE & ACCEPT